This Installation requires the following items:

The box should be positioned against the frame rail and about 3/8 of an inch from the edge of the grommet shown in the picture. 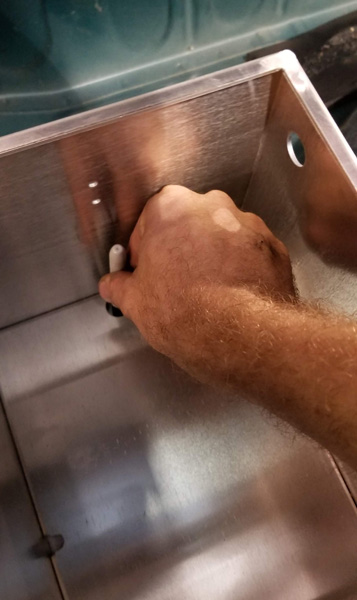 Using a marker or grease pen, mark the drill points through the battery box bolt-down holes. 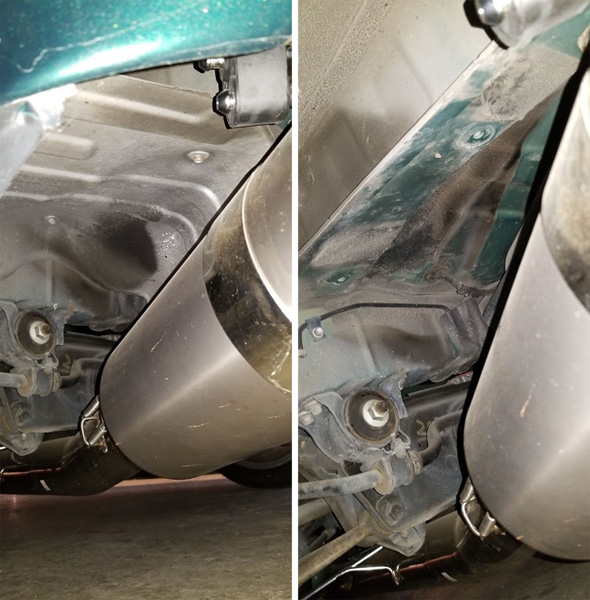 From underneath the vehicle, remove the exhaust heat shield below where the battery box will bolt down. This may require removal of the exhaust, depending on the type of exhaust is installed.

Move the battery box back out of the way, and using an 11/32 drill bit, drill a hole where each mark was made.

CAUTION! The rear hole is very close to the fuel cell. Take precautions not to hit it or puncture it with the drill bit! 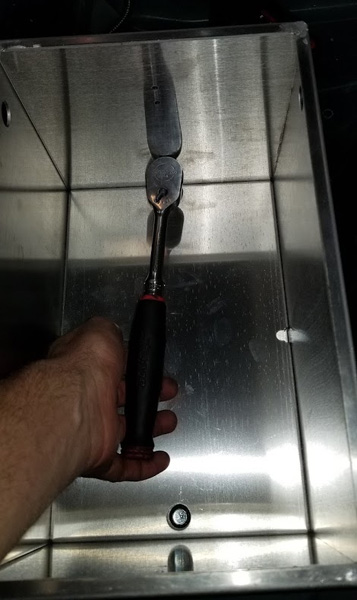 Bolt the battery box down to the floor using an M8 Bolt fender washer and nut.

NOTE: The floor of the car is not flat like the bottom of the battery box. Bolting the box down will pull the floor up to the box and will slightly screw the box as it is pulled slightly out of shape. As an option, you can use a spacer or add padding to add support under the box to reduce the floor deformation or box deformation. We have had good luck just bolting the box directly to the floor and allowing both to be pulled together.

Insert the threaded tie-down stud into the holes in the floor of the box and stand upright to stay out of the way of the battery being set in.

Set battery into the battery box and install tie down.

NOTE: The tie down will rub the edges of the box. This is perfectly fine and is designed to be as wide as possible to allow for different battery sizes. 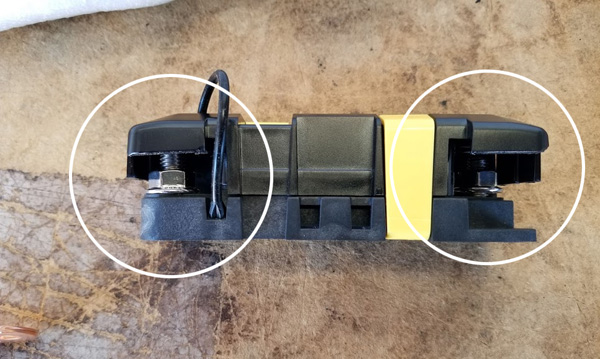 Using a Dremel, file or other tool, remove material from the fuse holder like shown in the picture. This will allow for battery cables to attach in the correct orientation.

Mount the fuse holder to the frame in front of the battery box using the supplied self tapping screws.

NOTE: While the screws are self tapping, the frame is quite thick and you will need to predrill holes using a 1/8 inch drill bit. The screws cannot tap into the frame by themselves.

DO NOT install the fuse until after the entire installation has been completed.

Attach battery cables as shown. Run the long battery cable in the shortest route to the front of the car where the battery used to be. This route should be as direct as possible. Run as shown in the picture forward and along the side of the rear seat, under the rear seat plastic panel (but below speaker). Then under the carpet along the door side of drivers seat. Then pass behind the kick panel and through an existing grommet into the fender area. Then from the fender area into the engine bay and up to the old battery location.

CAUTION: Avoid any sharp edges that can damage the cable. Protect the cable anywhere it might get damaged or cut.

If the factory battery, tie-down and tray have not already been removed, remove them. 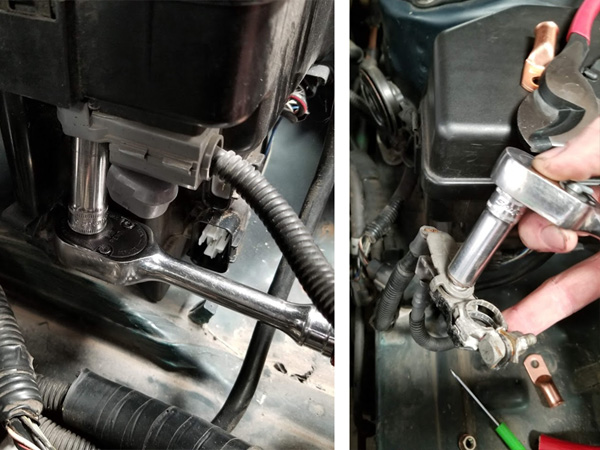 Remove the positive battery terminal, and the cable that runs from the terminal to the fuse box. 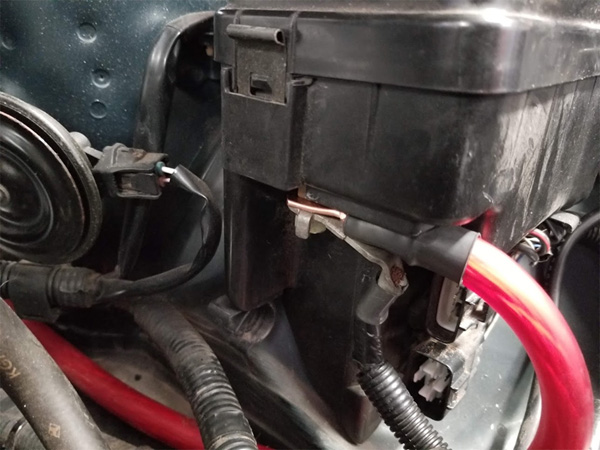 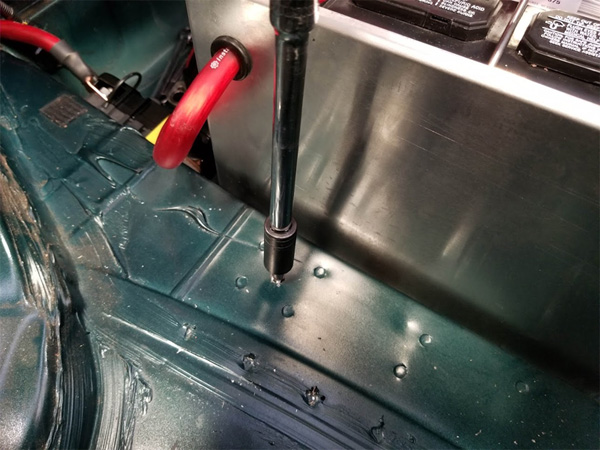 Using a drill and tap, tap the frame near the battery box with an M8x1.25 tap. 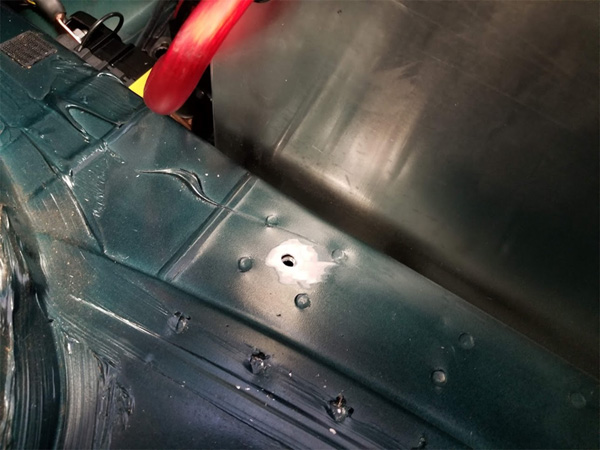 Using some sandpaper or other abrasive, remove the paint around the tapped hole to provide a good area for grounding the battery. 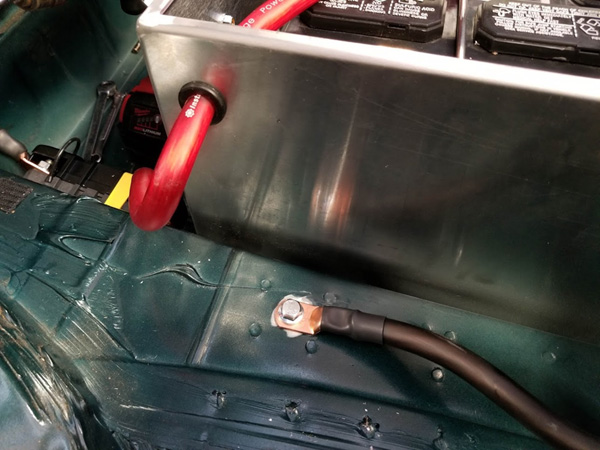 Bolt the negative battery cable to the drilled, tapped and cleaned hole as shown.

Using a step bit, drill a hole in the shown location just large enough for the vent tube to pass out of the passenger compartment and under the car. 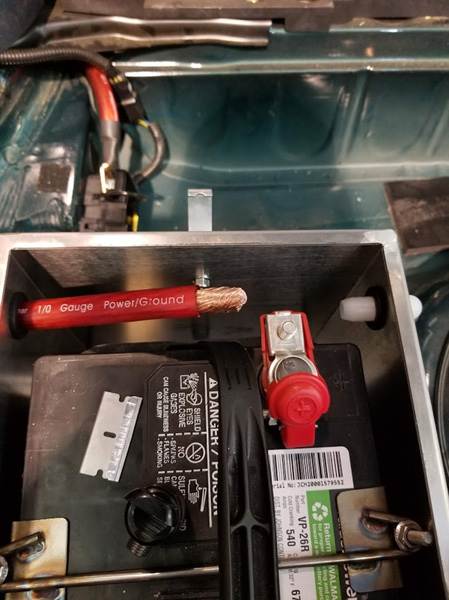 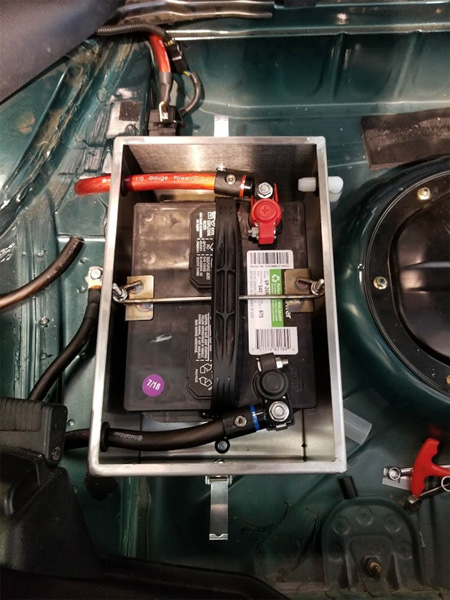 CAUTION: Be careful that the positive eyelet cannot touch any part of the battery box or it will short out!! If needed add insulation around the eyelet to make sure this cannot touch anywhere. Also be sure that the lid cannot come in contact either!!!  This area is not fused so any contact will cause serious damage to the battery box, battery or cable. 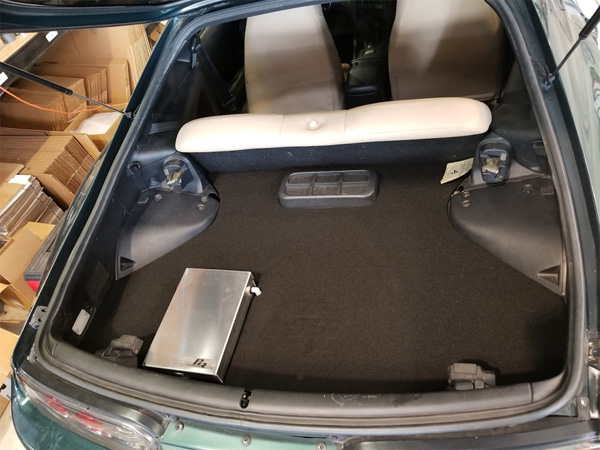 You can now install the battery box lid, and the fuse. Trim the Styrofoam padding that was removed in step 1 to fit nicely around the box, and the battery cables.

If you purchased the PHR Trunk Deck with battery box cutout, it can also be installed now.